New project to combat antimicrobial resistance in the skin microbiome 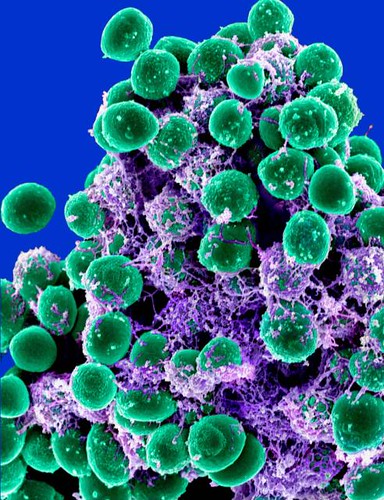 Coagulas negative staphylococcus, the group of bacteria targeted by the study. Image: “Staphylococcus epidermidis Bacteria” by NIAID on Flickr, licensed under CC BY 2.0

Dr Mark Webber from the Quadram Institute is to lead a new project on the risk to humans and animals of antiseptic tolerance in the skin microbiome. This will help combat the rise of antimicrobial resistance and help protect the most vulnerable from dangerous infections.

Just like the gut, our skin hosts a community of microbes, collectively known as the microbiome. One group of bacteria in the skin microbiome, known as ‘coagulase negative staphylococcus (CoNS)’ can cause serious infections in humans and animals if there is a skin breakage. This is particularly a problem in premature babies who are vulnerable to infection and often have multiple tubes inserted that breach their skin barrier.  To reduce the risk of infection, two major antiseptics are widely used to treat the skin but recently there have been multiple reports of bacteria beginning to develop resistance to these antiseptics.

The project is being supported by a grant from the Biotechnology and Biological Sciences Research Council (BBSRC), part of UK Research and Innovation (UKRI).

The grant will enable Dr Webber and his co-investigators at the University of East Anglia and the Norfolk and Norwich University Hospital to investigate how CoNS may become antiseptic resistant. The team will carry out experiments to understand how the antiseptics work upon the bacteria and how the bacteria can adapt to overcome this.

The group are currently collaborating with Professor Paul Clarke from the University of East Anglia, and Consultant Neonatologist at the Norfolk and Norwich University Hospital.

The study will combine computational genomics with evolutionary experiments. Working with Quadram’s Head of Informatics Dr Andrew Page, the team will sequence the genomes of over 1000 CoNS bacteria from the skin of babies from neonatal intensive care units. They will then compare these genomes against the ability to survive antiseptics of each bacterium to identify any genetic changes that cause antiseptic tolerance.

The “donut” skin model of re-epithelisation, developed by Drs Jelena Gavrilovic and Damon Bevan at UEA, will be used to expose bacteria to the antiseptics on skin in laboratory conditions. Find out more about the model at here.

Using a realistic model based on real human skin developed by Dr Jelena Gavrilovic at UEA, the team will expose bacteria to the antiseptics on skin in laboratory conditions to monitor how bacteria respond and capture the genetic changes that allow the bacteria to tolerate the antiseptics.

To help pinpoint important genes, the researchers will use a tool called TraDIS that they have developed that tests a large library of mutants which can simultaneously assay all of an organisms genes to find the ones that respond to a particular stress, in this case the antiseptic.

A key outcome from the project will be the formulation of new guidelines for the use of antiseptics with neonatal babies. Guidelines for this don’t currently exist, so the teams at Quadram and NNUH will combine their findings with clinical data and pass on their findings to the National Institute for Health Care Excellence (NICE).

The grant will also facilitate impact and knowledge exchange in regard to the data collected from the research. Industry partners who produce novel antiseptic formulations and other preservatives used in skin care products will be able to utilise the data to ensure their products achieve maximum impact. The work will also be used to inform policy and decision making, helping to generate the best practise guidelines for antiseptic use in humans and animals. Lastly, findings of this research will communicated to patients and the wider public since antimicrobial resistance is a high visibility subject that largely affects the community.

Dr Webber and his research group at the Quadram Institute investigate how antimicrobial resistance evolves in bacteria, using the knowledge they generate to prevent and eradicate infections as well as developing new treatments.

“We know that infection in premature babies caused by organisms that live on the skin can be devastating, but currently there is no standardised guide for how to minimise the risk of this happening” said Dr Webber. “We hope our research into how bacteria can, and cannot survive antiseptic exposure can be used to help guide clinicians as to how to protect these most vulnerable patients”.