26 marathons down, just one more to go for ME fundraiser Mike

For Mike Harley Sunday March 27, 2022, will be the culmination of a long road towards his ambition to run marathons in all 27 European Union (EU) countries for a charity close to his heart.

Mike, 39, a father of one from Bristol, started his marathon mission back in 2015 and has seen his schedule inevitably disrupted by the pandemic over the past two years. But what’s driven him to train for up to 35 miles a week and run 26 marathons so far over the past seven years?

Mike was motivated to raise money for the charity Invest in ME Research after his best friend Ian developed ME after picking up a viral infection. He’s seen at first-hand the devastating and debilitating impact ME had on his friend’s health and life generally. 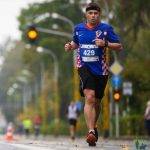 And here at the Quadram Institute on the Norwich Research Park, the money raised by Mike and others for Invest in ME Research is helping fund a clinical research trial into the disease, myalgic encephalomyelitis (ME).

The charity has awarded £625,000 for continued research into ME at the Quadram Institute and fund a clinical trial of Intestinal Microbiome Transfer (IMT), also known as Faecal Microbiota Transplantation (FMT) being performed alongside other biomedical research at the Quadram.

The clinical trial, RESTORE-ME, has also been delayed by the pandemic but 2022 will see the study get underway once a new IMT facility has been built. There are around 250,000 people in the UK with ME. It causes widespread pain, extreme fatigue, an inability to concentrate, and for a large proportion of people, gut disorders such as Irritable Bowel Syndrome (IBS).

Although there are various therapies that aim to relieve the symptoms, there is no cure and the causes of ME remain unknown. The planned trial will transplant the microbiota from healthy donors into participants with ME who volunteer to take part.

Quadram Institute principal investigator Prof Simon Carding said: “We are truly grateful to people like Mike who do an outstanding job of supporting biomedical research into ME through their fundraising. We wish Mike all the very best for his final marathon.”

Mike’s first fundraising effort saw he and his friends raise money for the charity by visiting all 92 league football grounds in 92 hours. After that he wanted a new challenge and, having once been the youngest runner in the London marathon, Mike saw rediscovering the 26.2-mile distance as the right test.

Mike said: “I really enjoyed the training and testing myself and the idea of running four or five marathons a year to take in all the EU countries felt like the right challenge for me. It’s been a great experience. When I’m in each country I meet people from the ME associations over there and my family and friends have also been out to support me.”

His first marathon was in Prague in 2015 and now he’s ready for Rome as the final marathon on 27 March which completes the full 27. His original target was to raise £26,200 for the charity but his total is currently £34,500, and Mike would love to hit £42,195 (the marathon distance in kilometres).

And what are Mike’s thoughts as he contemplates the finishing line?

Mike said: “The people that I’m running for can struggle to stand up or even take a shower, that’s how debilitating ME is. That’s what’s driven me, and this has been such a big part of my life I’m sure it will seem strange to have finished the challenge.”

As he reflects on what’s been a monumental marathon effort Mike says the highlight was that first Prague marathon – the low was struggling with an unseasonably hot 33 degrees for the Vienna marathon in April 2018.

As for the future, Mike’s certainly not finished with running. There’s trail running or even ultramarathons. Watch this space.

Postscript: Mike Harley successfully completed his 27th EU marathon in Rome on 27 March 2022. He also beat his fundraising target of £42,195 (to reflect the 42.195km in a marathon). Amazing work, Mike!