On 9th and 10th March, the Anglia Innovation Partnership hosted part of the Nuffield Contemporary Scholars Conference (CSC) for 2021/22 at the Norwich Research Park.

Bushra Abu-Helil was invited to participate as a scientist, and has blogged about her experience.

Nuffield Scholars, comprising farmers, veterinarians, agribusiness owners, industry leads and community activists, have a two-week intensive programme in the UK to support their one-year research topic of value to themselves and the industry.

The Nuffield Contemporary Scholars Conference was attended by 122 scholars from 15 countries, plus 30 members of the Nuffield team and 10 people from the Norwich Univeristy of the Arts,, along with Robbie Moore MP and BBC Radio 4’s Farming Today (Image: Norwich Research Park)

During the conference, scientists from across Norwich Research Park were invited to foster discussions as part of a Design Sprint on a number of critical questions facing the agriculture industry to 2050. This was hosted and facilitated by Norwich University of the Arts (NUA). The scientists were asked to act as “walking encyclopaedias” providing insight and critical thinking to the issues facing the future of agriculture.

Discussions and networking were an inherent aim of this process. But the final outcomes are designed to potentially introduce and influence real world changes. They involve the scholars presenting ideas, such as a new policy or product, to members of the House of Commons and the House of Lords in London.

On the first day we had introductory talks from Norwich Research Park scientists, and I was reminded of the incredible science, inspirational collaborations and national capabilities we have.

The talks were not only fascinating and illustrated the science occurring in Norwich but helped to ensure that the scholars and scientists were all starting with a similar basic understanding.

I was able to meet some amazing scientists  that I may not have crossed paths with otherwise, from the Quadram and Earlham institutes, the John Innes Centre and The Sainsbury Laboratory, UEA, 2 Blades, as well as the Tyndall Centre for Climate Change Research and the Norwich Institute for Sustainable Development.

The John Innes Centre and Quadram Institute reminded me of the global impact of research and collaboration efforts that are occurring around the world, already involving us. The culture, resources, expertise, and facilities; I think we sometimes forget how lucky and privileged we are to pursue our research.

The Tyndall Centre took us back to basics with climate change. We often think of climate research as a new topic, but did you know Svante Arrhenius described the effects of climate change way back in 1896?

The Norwich Institute of Sustainable Development taught us that innovations aren’t always new technologies or inventions, sometimes we just need to repackage traditional methods from around the world, such a permaculture or silvopasture systems.

The value of collaboration

A key lesson from the conference was the value of collaboration. Crop farmers, livestock farmers, soil enthusiasts, water aficionados, scientists, veterinarians, industry leads, from around the world, all coming together. These are passionate people, some of whom have dedicated their lives to these topics.  But whilst most are thinking about future impacts on their own industry sector and designing their own response to this, many do not have the time to think about the wider food system, impacts of climate change on food security, and what changes should happen, where and when.

This is why this kind of initiative is empowering and powerful potentially, so the farming community can link up with the science and research community. They need change now and we scientists were there to provide some insights to support their reflections. Did you know, much like medicine, there is an approximate 15-year translation period from laboratory research to real world use on farms?

What is a Design Sprint?

The Design Sprint is an accelerated decision-making strategy to reduce risks in projects. It is a time-constrained process, using different methods of creative thinking to empower and validate novel ideas.

Question themes ranged from current global issues of water safety, food security, meat consumption reduction and general sustainability. After two days of debates, discussions, and daring ideas, each team delivered a presentation, which would later be brought forward to UK ministerial teams. We heard that, in a typical parliament debate (usually lasting around four hours), a speaker only has three minutes to speak and make their case, which gave me a new insight into the importance of practising short communications, such as elevator pitches.

Facilitation from NUA taught us all different ways of thinking and innovating. Creativity is essential to science and is a trait we can develop ourselves.  A random word cloud generation exercise worked well to supply random prompts and invigorate our brains. Repetition is essential in developing our creativity, and so that we can keep improving on a focused idea; we must give ourselves time to be creative and work on those ideas. 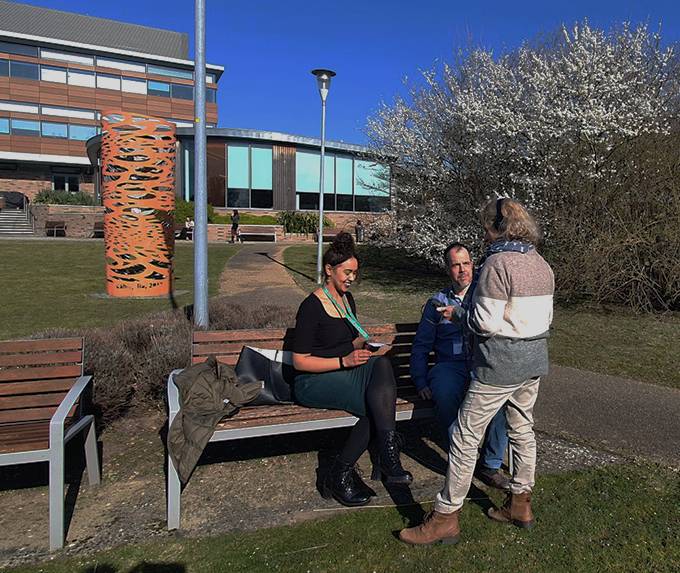 I was luckily enough to be interviewed by BBC Radio 4 Farming Today who are creating a feature for the event, which will be broadcast on 2nd May. I reiterated that this has been an opportunity for scholars to learn from scientists but also for the scientists to learn from the scholars too. Our science research is designed to help those in the industry. It is important to know their needs. I also explained some of the inspirational innovations from around the world that could provide a wider benefit such as rapid faecal scour tests for calves that allows that allows detection of four different microbes, in just 10 minutes and can be done on the farm. I also learnt about Oosterwold Landbouw in the Netherlands, which is revolutionising urban agriculture by giving back power to the people.

Considering that the agriculture industry is the least diverse in the UK, I was delighted at the number of women and people of colour from across the globe. I met Kenyan crocodile farmers, Australian Jackfruit farmers, and an inspirational young woman who has a cattle farm in Brazil! Everyone I engaged with, be it a scholar or scientist, approached the event with open minds and hearts, ready to learn and inspire in order progress global sustainable agriculture development.

The experience was refreshing and reminded me of the bigger picture surrounding my PhD project; who benefits from my research, where, and how?

It has been my pleasure and a privilege to participate.