Digesting the facts about milk and health

Food scientist and researcher Dr Anabel Mulet-Cabero is an expert on the impact of dairy structures on gastric behaviour and nutrient digestion. For World Milk Day, Dr Mulet-Cabero digests the facts about milk and health, revealing exactly how milk is digested in the human body. 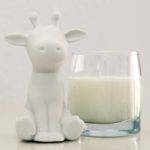 Cow’s milk has been recognised as an excellent nutritional source, containing essential proteins, lipids, carbohydrates, vitamins and minerals, in particular calcium. The bad press that milk receives is often attributed to its content of saturated fatty acids, which has been linked to cardiovascular diseases. However, the overall scientific evidence indicates that intake of milk and some dairy products does not increase the risk of cardiovascular diseases. In fact, there seem to be beneficial associations1. This misleading message might be attributed to the generalised approach of evaluating the health benefits of food according to its individual components rather than the form and structure of the food itself. Then, the health benefits of dairy products are probably due to a combined effect of the various components when consumed as a whole.

Moreover, milk proteins are classified nutritionally as high-quality proteins, usually referred to as the gold standard. They are highly digestible and easily absorbed, as well as one of the richest sources of the nine essential amino acids we need to consume every day because our body cannot make them. The main proteins in milk are caseins and whey proteins. According to the rate of amino acids appearance in plasma observed in a clinical study2, caseins and whey proteins have been designated as slow and fast proteins, respectively. Studies have been carried out at the Quadram Institute and Teagasc Food Research Centre (Ireland) to understand the mechanisms behind this different behaviour and the impact of formulation and processing of milk on nutrient digestion.

What happens to milk in the stomach? 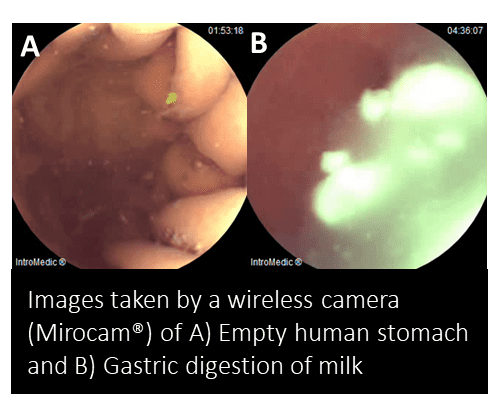 Milk undergoes major structural changes in the stomach. The liquid milk is transformed into solid clots with mozzarella-like consistency. This is attributed to the coagulation of caseins due to the stomach’s acidity and the action of protein degrading enzymes. Indeed, this is very similar to the cheese production process! We investigated the digestion behaviour of whey proteins and caseins and different blends using an advanced digestion model that can simulate the main processes occurring in the human stomach3.

We found that the structural changes occurring in the stomach limited the rate of absorption of the different milk proteins. Strong mozzarella-like clots stayed in the stomach for longer before they could be broken down and emptied into the small intestine. This helped to explain the slow and rapid amino acid absorption of caseins and whey proteins, respectively, observed in the clinical study.

What happens when milk is processed?

Raw milk is conventionally heat-treated to kill bacteria and ensure it is safe to consume. The most common heat treatments are pasteurisation and ultra-high temperature (UHT) treatment. The latter involves heating at 135-150°C, and the resulting milk can be stored without refrigeration for months. We found that these industrial processes have a profound effect on the way nutrients are digested in milk4. UHT-treated milk resulted in more rapid delivery of proteins and lipids, in contrast to pasteurised and raw milk. This was due to the formation of softer clots in the stomach model that were emptied more easily into the intestine. We found that this was because the heating caused different structural changes, on a molecular scale, to the initial conformation of caseins and whey proteins, affecting their ability to form clots in the stomach.

Cow’s milk is unique in its composition and digestion. Changes in the initial matrix of milk by processing or formulation can change the way nutrients are digested. This, in turn, could affect the physiological impact of the proteins, such as muscle synthesis and appetite control. 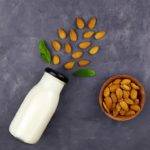 In recent years, cow’s milk has been increasingly replaced by plant-based beverages using soya, almond, oat, and rice. These plant-based beverages are marketed as alternative “milk”; however, by definition, they cannot be regarded as “milk” since they don’t come from a ruminant (cow, sheep, goat, etc.).

Consumers might prefer these beverages for different personal reasons, particularly those seeking to shift consumption towards more environmentally friendly protein sources. However, it is also important to understand the nutritional and health values of these different products. This is particularly important if they are meant to replace cow’s milk, with special attention in terms of protein, minerals and vitamins. The nutritional quality of the proteins in plant beverages is generally lower compared to cow’s milk, and only soya contains all nine essential amino acids.

However, nutritional quality is not only about the composition but mainly about how easily those amino acids get into our body. Plant proteins are usually more complex to digest due to the presence of specific components such as fibre and enzyme inhibitors. Plant beverages have little or no intrinsic calcium, vitamins A, B2 and B12, so they are usually fortified to match the levels found in cow’s milk. However, the calcium added may not be as easily absorbed as that in cow’s milk.

At the Quadram Institute, we are investigating how these plant-based beverages are digested and how their structure can be modulated to mimic closer the unique properties and health benefits of cow’s milk.