The new variant virus and Norfolk.

A new variant of SARS-CoV-2 has been reported in the South East and East of England. It has been named VOC-202012/01, which stands for Variant of Concern with the date, December 2020.

At the Quadram Institute as part of the COVID-19 Genomics UK consortium (COG-UK), we have been working hard to map out the spread of SARS-CoV-2 in the region and have been actively working to understand the spread of this new variant.

We know a few things, but there are many caveats. It takes time to perform genome sequencing, so when we do find something, we may be looking two weeks in the past. Only a small percentage of positive samples will be sequenced, usually about 10 per cent but it does vary. 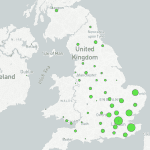 First of all, the national picture. The location of all VOC-202012/01 SARS-CoV-2 genomes have been mapped across the UK. As you can see (below) Norfolk is seeing a significant number of cases of the new variant (the size of the green circle is proportionate to the number of new variant samples sequenced).

In the first week in December, the new variant accounted for 45 per cent of all positive samples in the community in Norfolk. These samples primarily come from community testing such as drive through testing and home testing kits.

Looking at the hospitals in the county, during the second week of December, the new variant accounted 36 per cent of new cases at the Norfolk and Norwich University Hospital (NNUH). This compared to under five per cent for other acute hospitals in Norfolk. There is a time lag between getting infected and being sick enough to require a trip to the hospital for COVID-19, so we would expect the new variant cases to rise in other hospitals across the county in the coming weeks.

As the virus mutates it picks up small changes occasionally, gaining approximately one mutation for every 10 people it infects. We can use these mutations to map how the virus spreads. So, when we map out all new variant samples on a national scale, and look at Norfolk, we can see different groups of samples, with different distinct changes.

There have been at least seven independent introductions of the virus into the county, all happening in November. There are likely many more, but these are the ones we can put our finger on because they are distinct. This tells us that there is a continuous flow of the new variant into our region, rather than a one off introduction.

Some of these introductions will go nowhere, people will get sick, self-isolate and that transmission chain ends. In other cases, a single introduction can cause a huge number of subsequent cases. This appears to have happened in Wymondham in south Norfolk in November, with a distinct mutation allowing us to track that outbreak. NNUH is the nearest hospital, which would explain the differences in the proportions of cases that hospital is seeing.

There is no evidence to suggest the new variant causes more severe disease or affects age groups differently to other lineages of the virus. However, those that are vulnerable to severe infection (older people and immuno-compromised people) remain vulnerable. If this new lineage is more transmissible, more vulnerable people will catch it faster, putting them and the NHS at risk.

The simple things to reduce the spread of the virus do work, so now is the time to redouble our efforts and wear a mask, wash your hands, and keep plenty of space between you and others.