In the fields of food and plant science, Norfolk is a centre for excellence. Ripe in agricultural diversity, the region benefits tremendously from the leading farming and agriculture hubs in East Anglia. It is also home to Norwich Research Park, one of Europe’s largest groups of environmental, health, nutrition, and plant science researchers.

Celebrated as the UK’s ‘breadbasket’, Norfolk hosts fertile soils and a favourable climate. The region’s conditions make it ideal for wheat, barley, and other combinable crops. In fact, farmers in East Anglia grow enough grain to produce 5,774 million loaves of bread per year. Moreover, the region’s agricultural output totalled a staggering £3.3 billion in 2018.

Thanks to its proximity to the world-class plant and food scientists at the Quadram Institute, Earlham Institute, John Innes Centre and The Sainsbury Laboratory, the region can add crop innovation to its impressive list of credentials. Scientists across Norwich Research Park regularly collaborate to revolutionise food science and crop growing in Norfolk and beyond.

One such example is a new speed-breeding technology called GrowCab.

Commercial growth chambers can be large and expensive, as well as impractical. Quadram Institute, John Innes Centre, Earlham Institute, and Aarhus University researchers developed a novel design for a speed-breeding cabinet. GrowCab is a low-cost, convenient way of growing plants on the bench in the lab, can be constructed using low-cost materials, and is freely available (open-source). As a result, the technology enables budget-limited crop researchers and breeders worldwide to select new crop varieties more rapidly.

Quadram scientists are bringing small-scale plant growing chambers to the public, too, thanks to the PERNUG project.

Hailed as the next generation in farming practises, vertical farming uses a system of racks or stacked shelves to grow food, almost like a plant bookshelf. PERNUG combines space-saving plant growing chambers with the nutritional expertise of Quadram food scientists, delivered through recipes and a custom app.

PERNUG’s hi-tech kitchen gardens will give people access to high nutritional quality plant foods grown in their own homes, tailored to their own personal nutritional needs.

Whilst Norfolk is famous for being the UK’s ‘breadbasket’, scientists want to change the bread put on the table for a healthier alternative.

PulseON®, developed by Quadram and King’s College London researchers, is a new flour that utilises the health power of pulses. In its first consumer trials, PulseON® enriched bread had the same texture and taste as white wheat bread. Yet on average, the enriched bread lowered the blood glucose response to white bread by 40%. The new flour presents an exciting opportunity to develop the next generation of low glycaemic food products.

Did you know one-third of England’s potato crop is grown in East Anglia? From apples to peas, the region is a major centre for horticulture. Scientists at the Quadram Institute and Norwich Research Park are harnessing these locally-produced foods for health.

The potato is one of the world’s most important food crops, but it is only harvested once a year in most growing regions.

What’s more, a large proportion must be stored efficiently to ensure there are enough provisions until the next harvest. In 2018, Jessica Garnett and Dr Kate Kemsley had the bright idea to create a novel method to judge the state of commercially stored potatoes by looking at their response to light.

An apple a day really could keep the doctor away, thanks to their anti-inflammatory effects.

Inflammation is a natural process used by the body to protect itself against immediate harm. Still, if it is prolonged over time, it can have long term, chronic effects. Dr Paul Kroon discovered that quercetin, found in apples, onions, tea, and other leafy vegetables, alters metabolic processes in vascular cells in a way that would protect against inflammation.

A naturally occurring “wrinkled” pea variant can reduce blood sugar levels due to the higher levels of resistant starch and unique structure. Researchers from the Quadram Institute, John Innes Centre, Imperial College London, and the University of Glasgow conducted the study and Prof Pete Wilde was part of the research team:

The research was published in Nature Food and is a prime example of collaboration across the Norwich Research Park, aiming to understand the role of the whole food chain on human health.

The project brought together world expertise in plant science, food structure research, and biomolecular sciences. It unravelled how the genetic blueprint of the peas controlled its molecular and structural assembly and how this, in turn, controls how the peas are digested and the impact on blood sugar levels.

We are now working with food companies and growers in Norfolk to understand how these peas can be grown commercially and incorporated into everyday foods that will help tackle the growing incidence of type 2 diabetes.

Norfolk not only leads the way in horticulture and cereal crops; East Anglia is a prominent hub for pig and poultry farming. The region produces 2.2 million eggs daily whilst being home to over 1 million pigs, 26% of the national herd in England. 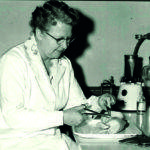 The Quadram Institute stands upon a rich heritage in poultry production and food safety. Working at Quadram’s predecessor in Norwich, the Institute of Food Research, Dr Ella May Barnes pioneered the ‘competitive exclusion’ principle through her studies of the chicken gut microbiome. She also highlighted the risk of antimicrobial resistance from antibiotics in poultry feed and food preservation. Dr Barnes’ significant impact on food microbiology and safety was recognised in 1978 when she was awarded the OBE for services to the poultry industry, and the newest building on Norwich Research Park is named in her honour.

At the Quadram, we’re carrying on the legacy of Dr Barnes’ work. For example, investigators from the Quadram Institute and Earlham Institute, alongside the University of Surrey, have more than doubled the number of microbial species known to live in the chicken gut. Furthermore, a study co-led by Professor Rob Kingsley showed that closely related Salmonella variants have very different effects on food safety and the health of pigs. PhD student Bushra Abu-Helil, who is part of the Narbad Group, is also helping to improve poultry welfare and health through her research:

Centres of National and Global Impact

Food labels play an essential role in guiding our dietary choices – but have you ever wondered where the nutritional information comes from?

The Food Databanks National Capability (FDNC), based here at the Quadram Institute, produces and manages the data on the composition of foods eaten in the UK. This data not only informs food labelling but underpins research into diet and health at the Institute and beyond.

The FDNC have been following the patterns and trends in food composition since 1978. Thanks to their data, people can make informed decisions about diet and choose healthy and nutritious foods.

When you think of yeast, you might think of a freshly baked loaf or a refreshingly cold brew. However, there’s more to these single-celled fungi than bread and beer.

The Quadram Institute is home to the National Collection of Yeast Cultures (NCYC), storing 4,000+ yeast cultures collected over 70 years. The potential of this living history of microbes is limitless.

Beer brewers now recognise the ability of long-forgotten yeast strains to impart flavour and heritage to their products.

Biorefineries can incorporate yeast to make biofuels or platform chemicals for medical and industrial purposes.

Furthermore, yeast is a key model organism in the emerging field of synthetic biology. Engineered or even reconstructed artificial strains may manufacture the fuels, food and pharmaceuticals of the future.

Urgent action and accelerated change are vital to secure our food resources for future generations. The world faces unprecedented global challenges due to climate change and a growing population.

Thanks to the region’s excellence, an ambitious proposal to reinforce Norfolk and Suffolk as the global centre for plant science with a focus on nutritious food has been backed by the Department for International Trade.

“I am thrilled with the announcement that Norfolk and Suffolk has been successful in gaining HPO status from the Department for International Trade. This will help further promote the commercial opportunities within Norwich Research Park’s cutting-edge plant and food research sectors, allowing us to continue to spearhead innovation.”