Variants of concern dominate evolution of SARS-CoV-2 in Zimbabwe

The worldwide spread of SARS-CoV-2 variants of concern has highlighted the urgent need for truly global vigilance in a world where less than 5% of the SARS-CoV-2 genomes sequenced to date are from countries with 80% of the world’s population.

In our recent correspondence in The Lancet Microbe, genomic surveillance work undertaken by Zimbabwe’s National Microbiology Reference Laboratory, supported by the Quadram Institute in Norwich, UK, has underlined the dangers of mutating variants. 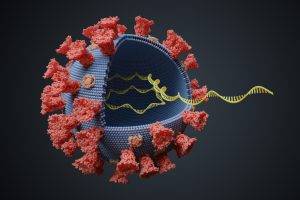 3D rendered illustration of the coronavirus with RNA molecule inside.

The Zimbabwe research shows that between December 2020 and January 2021, the period of Zimbabwe’s second wave of Covid-19 infections, that new variants were predominant with 89% of 107 sequenced cases featuring mutations of concern.

The identified variants included the previously reported B.1.351 (501Y.V2) and A.23.1 variants, along with a novel variant under investigation (C.2). The B.1.1.7, B.1.525, P.1, and P.2 and variants were not identified in Zimbabwe. Variants with concerning mutations have all replaced previously identified lineages in Zimbabwe.

Firstly, the B.1.351 variant of concern, originally identified in South Africa, accounted for 74 (69%) of 107 sequenced cases in December 2020, and 99 (95%) of 104 sequenced cases in January 2021. The population structure was consistent with multiple separate introductions. Zimbabwe is the second country other than South Africa to report B.1.351 as the dominant variant to date.

As in other countries, this variant has been associated with increased transmissibility, resulting in overwhelmed healthcare systems and in higher mortality than the first wave. Secondly, the A.23.1 variant of concern, first reported in Uganda, was observed in 3 (3%) of 107 sequenced cases in December, but was not observed in 104 sequenced cases in January.

Thirdly, a variant designated C.2 and containing a spike protein mutation (N501T) that was previously reported in another lineage of SARS-CoV-2 found in mink was present in Zimbabwe in both December 2020, and January 2021. N501T is thought to improve ACE2 receptor binding in mink.

A mutation in the same location, N501Y, is associated with increased transmissibility in humans. In December 2020, 18 (15%) of 117 of cases were found to be of the C.2 variant, whereas in January, 2021, this number fell to 3 (3%) of 104. Phylogenetic analysis of international genomes of the C.2 variant indicated that they were interspersed with C.2 genomes from Zimbabwean cases, indicating that Zimbabwe was a possible source.

In conclusion, variants with concerning mutations identified in December 2020, and January 2021, have replaced previously identified lineages in Zimbabwe. This observation highlights the importance of global surveillance by whole-genome sequencing of SARS-CoV-2 to identify sources and transmission routes, and to provide supporting evidence for policy decisions.

This research was partly funded by the Biotechnology and Biological Sciences Research Council Institute Strategic Programme Microbes in the Food Chain BB/R012504/1 and its constituent project BBS/E/F/000PR10352. We declare no competing interests.

Our correspondence is dedicated to the memory of Sekesai Mtapuri-Zinyowera, who died on March 4, 2021.