What is a hackathon? Coding, computers and community

We hear from Head of Informatics Andrew Page about what a hackathon involves, the benefits of taking part and insight into organising annual hackathons in the microbial bioinformatics community. 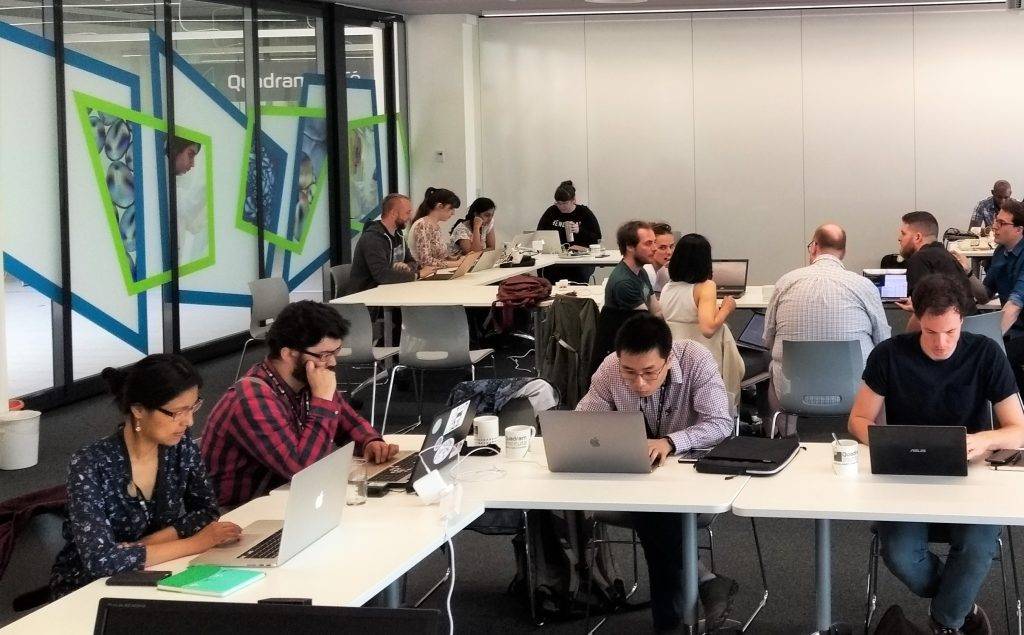 “A hackathon is an event that brings together technical experts to focus on solving common challenges that they collectively face. These  challenges can be small or big. A hackathon brings diverse expertise to address the challenge to benefit the whole community.

I first got involved in hackathons in 2015. I was part of a small group of bioinformaticians invited to a hackathon in Warwick, following a conference on Applied Bioinformatics and Public Health Microbiology. The aim of the hackathon was to bring together international expertise to address open challenges facing the community at the time, such as what are the best datasets to use to evaluate software, which bioinformatics software works best in different situations or how can we make it easier to reuse existing software.

I had a short discussion with a researcher I’d never met before. He proposed a straightforward change which greatly improved the software. The software, called Roary, is used by scientists all over the world and this update greatly enhanced the utility of the software.

A hackathon provides the opportunity for this kind of important interaction. You need the right environment and the right people. From there good ideas can flow.

A later hackathon identified that there was no obvious best software to solve a particular problem. So, we joined forces and tested out all the software on some good datasets to give us accurate insight into that data. This grass roots analysis involved bioinformaticians from four organisations on three continents and was published as a scientific paper in Microbial Genomics. This project illustrates the power of global academic collaboration.

Social side of the hackathon

Getting to know people in a small, emerging, field is important. These are the people you will work with for years to come, as collaborators or as teammates.

Alongside working together on software, the first hackathon helped form the Microbial Bioinformatics community through social events including spontaneous dancing and BBQs. Life-long friendships were formed.

Since the first event, every year we organise year a hackathon to coincide with one of the main conferences of interest to microbial bioinformaticians.

The hackathons are organised informally by the grass roots community. A member of the community near the conference location finds a room, in a university or a research institute, for bioinformaticians to gather for a few days. This informal ad-hoc organisation has been successful for the last seven years and is driven by the desire and dedication of the community.

The hackathons have taken place across the world including Bethesda in the US, Lisbon in Portugal, and Norwich and Bath in the UK. They have helped grow the community, bringing in new people and establishing strong collaborations.

When the pandemic hit, we switched to running virtual hackathons. This proved to be quite different. We had to deal with time-zone issues as we were spread around the world and distractions of everyday life, but it opened up opportunities to people who wouldn’t normally have been able to attend.

These hackathons were substantially larger so there was a different dynamic, but they worked and they have resulted in multiple scientific papers including a call to action to improve the quality of bioinformatics software by increasing the use of software testing and datasets for properly benchmarking anti-microbial resistance prediction software.

Connecting the community between hackathons

Over time, we have developed ways to stay in touch and exchange knowledge between hackathons. In 2016 the hackathon took place in Lisbon. We started using Slack to informally chat and share information, mostly to organise where we would eat dinner.

From the hackathons, our collaboration in the community developed the idea for the Micro Binfie Podcast, for scientists, researchers and clinicians working in microbial bioinformatics. Initially this started as a series of virtual lab talks, enabled by hackathons, and then later became a regular half hour podcast.

This September we will meet in Bath, UK for the eighth hackathon. We look forward to many more years of hackathons as our community of microbial bioinformaticians thrives and expands.”