Where do we get our gut microbes from and how do they change with age?

Our gut microbiome takes shape as soon as we are born and changes over our life. We find out more about where these microbes come from, how they are maintained throughout life and the impact of the aging process. 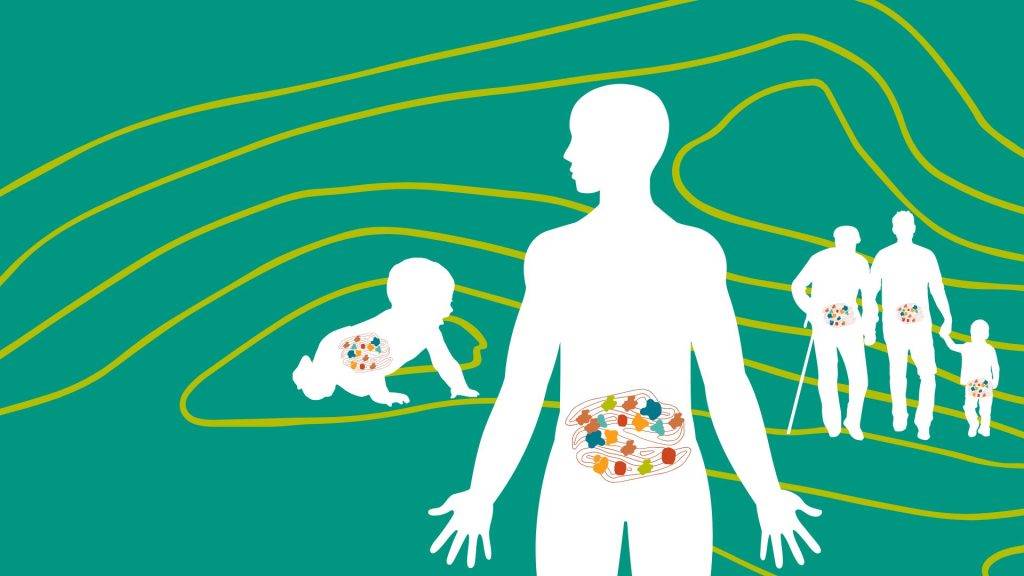 Early life is the first step in establishing a beneficial microbial ecosystem. Even before birth, the maternal microbiome can help in the development of the placenta and the healthy growth of the baby.

Initial colonisation of the gut by microbes happens during and shortly after birth, including babies gaining maternal microbes during childbirth. Infants are quickly exposed to a whole range of bacteria, fungi and viruses.

When Bifidobacterium bacteria live in the gut it can reduce potentially disease-causing bacteria that can cause life-threatening infections.

Our researchers in the Hall Group at the Quadram Institute are working to understand the importance of beneficial microbes in the development of the infant microbiota and how the microbiome profiles change during pregnancy and in newborns.

Our lifestyles can change the composition of our gut microbiome, for better or worse including:

A recent study showed how gut microbes persist throughout our lifetime.

The Hildebrand group looked at over 2,000 adult and infant faecal samples, including several from the same families, to investigate the genes present.

The research team showed that the different types of bacteria could be grouped into three groups based on the strategies the microbes use to survive in the human gut:

Throughout life, ageing affects our gut microbial community. Research suggests that bacterial diversity in the gut increases with age.

Many diseases are associated with changes in the types and behaviour of bacteria, viruses, fungi and other microbes in an individual’s gut.

Some of these changes affect metabolism and immunity, and this has been linked with age-related disorders including inflammatory bowel diseases, along with cardiovascular, autoimmune, metabolic and neurodegenerative disorders.

As we age, our gut microbiome changes, and we see a lower abundance of some beneficial bacteria.

The change in the microbiome with age can be due to physical factors. Reduced movement and activity, dental problems that reduce efficient chewing and dietary changes can all affect the microbiome.

A recent study gave the clearest picture to date of the gut microbiome in people with Parkinson’s disease. Researchers in the Narbad and Hildebrand groups found that there is reduction in the dominant bacteria usually found in a healthy human gut. These microbiome differences could be used as biomarkers, for spotting the earliest onset of the disease, and open new targets for therapies.

Recent research from the Carding Group in mice has shown that transplanting faecal microbiota from young into old mice can reverse hallmarks of ageing in the gut, eyes, and brain. Microbiota from old donors led to loss of integrity of the lining of the gut, allowing bacterial products to cross into the circulation. This triggers the immune system and inflammation in the brain and eyes.

Researchers are studying how long positive effects can last and identifying the beneficial components of the young donor microbiota and how they impact on organs distant from the gut. A study is currently underway at the Quadram Institute to investigate gut microbes and the role they may play in healthy ageing in people aged over 60.

At the Quadram Institute we are part of the Norwich Institute for Health Aging. This is a research community developing and implementing effective strategies to promote behaviour change in order to improve physical and mental wellbeing. We contribute our understanding of the role of food, health and gut microbiome in aging to help inform health policy, product and service innovation, economic growth and ultimately population wellbeing.