Researchers from the Quadram Institute have led a study that has uncovered a new link between the microbiome and bowel cancer progression.

Bowel cancer, or colorectal cancer, is one of the most common cancers, and is second only to lung cancer in the number of fatalities it causes each year in the UK. Given its impact, much effort has gone into understanding what causes it, and how it progresses. In recent years, increasing attention has been given on the role of microbes in the initiation and development of colorectal cancer.

Sequencing studies of the gut microbiome have shown that there are changes in the composition of this population of microbes that are associated with bowel cancer. Fusobacterium species are enriched in colorectal cancer tissues, with Fusobacterium nucleatum, a member of the oral microbiota, showing the most increased abundance. F. nucleatum has been implicated in tumorigenesis, chemoresistance and the overall survival of patients. But to devise strategies to alleviate its impact on patients, we need to understand the mechanisms that underpin its interactions with human cells. 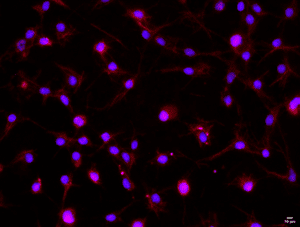 This has been the focus of work led by Dimitra Lamprinaki, a PhD student working in Professor Nathalie Juge’s group at the Quadram Institute and in collaboration with Professor Kristian Bowles from the Norfolk and Norwich University Hospital and Norwich Medical School at the University of East Anglia on the Norwich Research Park (NRP). The work also greatly benefited from international collaborations with colleagues from the Universities of Naples, Dundee and Alberta.

Published in the journal Frontiers in Immunology, they showed that F. nucleatum strains interact with specific proteins on immune cells called lectins. Lectins are proteins that bind sugars, and are found on many different types of cells, with different lectins binding specific sugars, or glycans, in a highly specific way. This allows the cells to recognise other cells or signals and react accordingly.

In this study, they found that F. nucleatum bound with a lectin called Siglec-7, leading to the generation of a pro-inflammatory response, consistent with the reported effect of F. nucleatum in the tumour environment in humans and animal models. The same effect was achieved using outer membrane vesicles or lipopolysaccharides binding to Siglec-7.

This work opens a new dimension in our understanding of how F. nucleatum shapes the tumour microenvironment and provides a molecular lead for the development of novel cancer therapeutic approaches targeting F. nucleatum-Siglec-7 interaction.

‘The findings that cancer-associated F. nucleatum and the vesicles they produce interact with receptor Siglec-7, which is an established immune checkpoint, not only provides new fundamental insights into how F. nucleatum interacts with human cells, but also provide exciting new routes to alleviate the issues associated with the presence of F. nucleatum in colorectal tumours’ said Professor Juge. 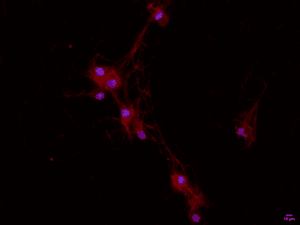 ‘Given the role of F. nucleatum in influencing colorectal cancer tumorigenesis and response to cancer treatment, there is significant interest in developing strategies that target F. nucleatum, preferably in the tumour tissue. However, antimicrobial strategies are limited due to concerns about antibiotic resistance and the mutualistic role of F. nucleatum in the oral cavity and other mucosal sites of humans. Targeted glycan interventions to displace Siglec-7-F. nucleatum interactions could help improve current approaches for the treatment of cancer by targeting F. nucleatum in the tumour environment and without compromising the rest of the gut microbiome or inducing antimicrobial resistance.’

‘We are very excited at the prospect of exploring these findings further through the European-funded GLYTUNES multidisciplinary training network for the bioinspired development of glycomimetics tuning the Siglec-Sialoglycan axis’ ( https://www.glytunes.eu/)