Connecting with science through art 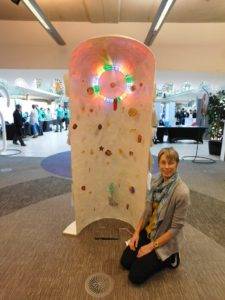 In 2019, Quadram Institute Bioscience (QIB) was delighted to host Jennie Pedley as their artist in residence. Jennie collaborates with scientists and the public exploring issues of health and the environment.

At QIB, her project, Art of the Gut (#artofthegut), was at the forefront of innovative strategies to enable QIB scientists to share their knowledge with members of the public through art. She began her residency working with Dr Lindsay Hall’s research group, highlighting how all scientists could explore alternative forms of communication.

The insights provided from the resulting public engagement activities with her work also increased our understanding of public perceptions about gut health.

During her residency Jennie developed and ran a series of interlinked activities beginning with a scoping workshop and a drop-in session at QIB to encourage scientist involvement and to identify key impact-focused goals. The latter was part of Norfolk’s first ‘Creativity and Wellbeing Week’ and enabled staff, students and visitors attending the QI endoscopy unit, to get involved in shadow theatre, making ‘microbes’ from wool and felt, visualising gut research in doodles and brainstorming future art projects.

This was followed by larger-scale workshops presented in collaboration with Dr Lindsay Hall’s group and the Science, Art and Writing Trust (SAW) in Norwich at Colman Junior School (for both deaf and hearing children) and St William’s Way library (families visiting with their children), and culminated in an interactive art exhibit at the Forum entitled ‘Wish for Wellness/ Hang your Hopes on the Microbes’, and a special pop-up exhibition at the Castle Quarter Mall as part of the Norwich Science Festival.

“Hands-on activities lead to innovations that being cooped up in a lab or at a desk might never have offered.” Mr Peter Bickerton, drop-in session participant.

Not only did Jennie develop her art activities with QIB’s researchers, she also collaborated with many other individuals and organisations on developing activities for the public. They included Dr Jenni Rant from SAW, who also invited writer, Richard Lambert to contribute poetry sessions at the school and library events, and other artists: local sculptor Chris Jackson, who works with reclaimed materials; theatrical set maker Richard Matthews; and artist Rach Anstey-Sanders who all contributed to the Norwich Science Festival exhibits. This resulted in a diverse range of activities including animation, laboratory shadow theatre, Petri dish drawings, doodling on villi templates, drawing vegetables, installing small planet drawings onto classroom windows, crayon rubbings of texture plates constructed in the image of different body parts and microbes, felting microbes, and a giant microbe installation.

‘It has been fantastic to work with QIB. The staff have been enthusiastic to discuss their work and to try new things. Many of them have their own creative practices. There are so many possible roles for the arts at QIB, such as providing different activities for staff allowing them time to reflect, enabling connections between different groups within the organisation, providing the public with new routes into scientific issues and exploring health and behaviour change with the public’ Jennie Pedley, QIB artist in residence.

Most of the children from Colman Junior School, both deaf and hearing, said that the workshop module they enjoyed most was art (20 out of 27 chose the ‘art’ sessions over ‘science’ or ‘poetry’ as their favourite). This strongly supports the premise that, when art activities are combined with key scientific information they have the potential to increase engagement with complex scientific concepts, in this case the role of microbes in gut health. When asked what they had learnt, the children’s answers predominantly included “we have good and bad bacteria”, indicating a good grasp of the workshop’s fundamental message. The children also expressed their interest in the new games and ideas presented. Sessions were presented in spoken English and interpreted into British Sign Language (BSL) by school staff. While the science terminology needed to be simplified for some of the deaf children, the visual ideas suited them very well, particularly the targeted shadow theatre techniques that Jennie, who has studied BSL, developed specifically for BSL users. The workshop also successfully increased engagement on Twitter and Instagram, for example: this image https://www.instagram.com/p/B5a5ejoFRmO/ which sparked discussion, and this video https://twitter.com/jenniepedley/status/1125505366937280514?s=20 which received 539 views. 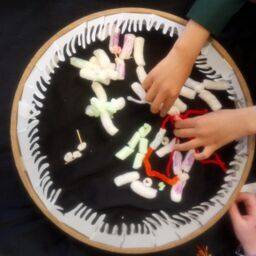 The workshops at St William’s Way library identified which of Jennie’s ideas for creative activities worked best in a library environment and promoted the greatest dialogue about science.

Feedback questionnaires indicated that engagement with art was a successful way to convey scientific messages and that the majority of participants were interested in doing more of these activities. 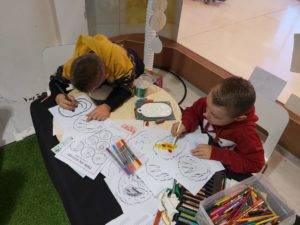 FACT: When children were occupied their parents were more open to entering into discussion.

The Norwich Science Festival (NSF) was attended by 137,000 visitors, predominantly families from Norwich and surrounding areas. Hundreds of visitors, of all ages and abilities, participated in the QIB exhibit activities.

The imagery created could either be taken home or used to adorn a giant microbe that formed part of the exhibit. The microbe was in the form of a vertical capsule; inside tiny wire slices of vegetable papyrus or almost translucent preserved slices of vegetables were lit by a ring light ‘plasmid’.

The vegetables drew attention to encouraging your good gut bacteria by feeding them on a wide variety of healthy food. On the outside the wires protruded like the hairs of the bacterium and were used to support the public’s drawings or ‘Hopes for Health’. The installation was accompanied by displays on the wall linking the textured plates with particular research projects at QIB.

The activity was so popular that the paper ran out many times a day! Feedback from a selection of visitors indicated that they were planning on following up by visiting the QIB website for more information, and that they had enjoyed the activity, finding it both “fun” and “thought provoking”. Teenage visitors, who can sometimes be harder to engage, said that the activity was “calming”. From feedback received we can improve the feedback form and method of capture for future activities. In a face-to-face snapshot survey thirteen people said they had learnt “a lot”, ten “a fair bit” and three “something” – nobody said they had learnt “nothing” or only “a little”.

The value of the activities at NSF can be best illustrated by the comments below:

At the special pop-up exhibition at the Castle Quarter Mall some adults and children chose to wear the felt microbes they had made as brooches by adding a safety pin as a ‘pledge for veg’, a reminder to eat more veg to feed your microbes. Jennie also suggested and arranged for a British sign language interpreter to assist with public dialogue, making it far more accessible to deaf visitors. Most visitors to the Castle Quarter Mall event had not heard of QIB and thus we were effectively reaching a new group of local stakeholders.

QIB staff and students involved in the art activities reported that they “found the experience inspiring” and “valuable to gain experience in Public Engagement”. They also reinforced earlier observations that “by entertaining the kids, the parents were able to talk with us”.

Those who participated quickly became engaged, finding the activities therapeutic and their perceptions changing. Even less-engaged scientific staff and students appreciated the value of participating in art activities (the marmite effect) saying they found it insightful and useful for thinking ‘outside the box’ about how they could present their research findings more effectively.

CHANGING PERCEPTIONS “I went home with a wonderful insight into the work of the Quadram Institute. Previously I had a managed perception. One of ‘cutting edge research’ and a glittering edifice. But if I am honest I also had a deep personal perception. A negative and rather fearful impression of secrecy beyond an intimidating façade. Coming together, engaging in these wonderful, hands- on creative activities and meeting the real people behind the closed doors, broke down all of those pre-conceptions. I went home with a new understanding of the work at Quadram and of my own biology.” Ms. Mandy Hoffman, workshop volunteer. 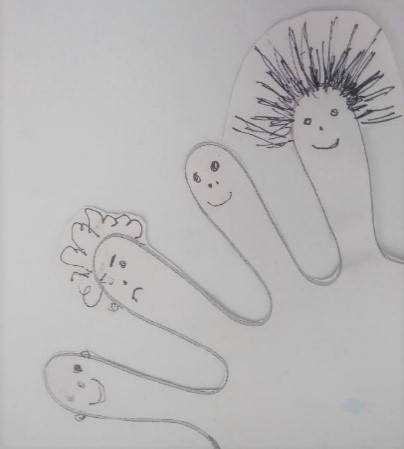 OBSERVATION from Ms. Mandy Hoffman: “A lady in her seventies drew finger puppets on a print of villi and chatted about the imagery as she drew, reflecting her feelings on the chronic illness (diabetes) that she was living with. When finished, I was left with a print of villi re-purposed as a finger puppet and a little insight into the sadness of ageing. Yet, within our ageing bodies, flickered the flame of our humanity – which quickens our senses and helps us to face another day.

Jennie now has a network of local artists with skills in writing, drama and the visual arts to work on future projects in science and health. The residency increased her confidence in planning art-science projects in Norwich and has led to relationships and work with other partners at Norwich Research Park. It also led to Jennie being asked to provide a “day in the life” article for the Culture, Health and Wellbeing Alliance. Her work was additionally promoted by the QIB website, the NSF in the Eastern Daily Press and by The Big Draw. These articles, in turn, generated further discussion about health and the gut microbiome on social media outlets such as Facebook, Twitter and LinkedIn.

Novel Knowledge Exchange activities such as art exhibitions and hands-on craft workshops are proving to be useful tools in reaching new or disengaged stakeholders. Scientists and artists both ask questions about the nature of things, and both find ways of engaging the public, so having a freelance artist working with QIB has helped open our scientific eyes to art-based opportunities. We can now pursue these opportunities through face to face interactions and innovative use of social media to increase our outreach and the feedback we receive. It is hoped that this work will continue to evolve and reach more members of the public as we open new discussions on healthy ageing and the role of our gut microbiome.  We understand that effective planning of Public Engagement activities is key for facilitators as well as participants if we are to achieve greater impact while combining art and science.

Jennie was introduced to QIB by Dr Jenni Rant from the SAW Trust. The residency was funded by Norfolk County Council Arts Project Fund and an Arts Council England National Lottery Project Grant with a contribution from QIB. 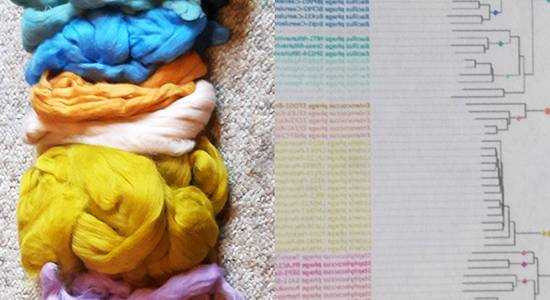