Scientists and clinicians at the Norwich Research Park have pioneered a new method for profiling the microbiome of preterm babies that can significantly speed-up the identification of infections and indicate more effective treatments.

By harnessing next generation sequencing techniques, the team from the Quadram Institute and the Earlham Institute (EI) have shown that they can rapidly and reliably identify the microbes present in a preterm baby’s stool sample that may cause life-threatening conditions such as sepsis or necrotising enterocolitis (NEC). The method also uncovers the presence of antimicrobial resistance genes, vital information needed to select the most effective treatment.

Using Oxford Nanopore Technology’s MinION portable sequencing device coupled with bespoke software to analyse the sequence data in real time, data can be obtained in under 5 hours. With current methods taking up to 48 hours, developing this platform for routine use in a clinical setting would allow faster and tailored antimicrobial treatments to be used.

“Preterm babies are born with underdeveloped gut physiology, immunity, and have an altered gut microbiota, all of which increase risk of life-threatening infections. Time is of the essence in detecting or diagnosing infections” said Dr Lindsay Hall from the Quadram Institute. “Not only could our approach be more effective, it will also reduce the use of antibiotics and help slow the rise of antimicrobial resistance. 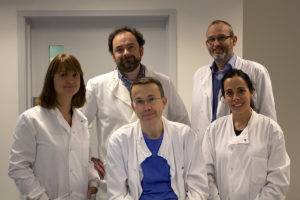 Dr Richard Leggett, Group Leader at EI, added: “With the MinION and our own analysis pipeline (NanoOK RT, developed specifically for this work), we can go from faecal sample to pathogen and antimicrobial resistance (AMR) profile in just four to five hours. With these kinds of high-risk patients, time is absolutely critical. We can also take advantage of the MinION’s long DNA reads to place AMR genes within host bacteria, enabling better understanding of antibiotic resistance.”

“Nanopore sequencing is an interesting technology because it provides useful data so quickly. We were excited to see how well it could perform on clinical samples – with our custom software. It hasn’t escaped our attention that because it is cheap, small and low powered it could be uniquely useful in lower and middle-income countries,” said Dr Matthew D. Clark, former Head of Technology Development at EI, now Research Leader at the Natural History Museum London.

To test their platform, the researchers used the portable MinION to carry out shotgun metagenomics on mock microbial communities. Shotgun metagenomics analyses the genomic sequence from a mixed collection of organisms, in this case 20 different microbes. Having confirmed that the approach using the MinION worked, the researchers progressed to using samples obtained from preterm babies.

To assess how well the platform worked in real life situations, the researchers worked with the Norfolk and Norwich University Hospital’s Neonatal Intensive Care Unit (NICU). The clinical research team collected faecal samples from preterm babies, with consent of the parents, as part of a long-term collaboration into the gut health and microbiome in very premature babies. 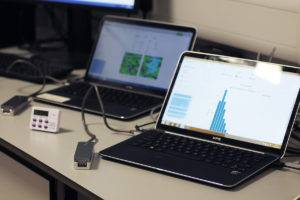 The method, published in the journal Nature Microbiology, discerned between healthy babies and those diagnosed with NEC or sepsis, with the healthy babies having a strong population of beneficial Bifidobacterium and the others harbouring either E. cloacae or Klebsiella pneumoniae, both of which can cause life-threatening infections.

Prof. Paul Clarke, consultant neonatologist and research lead at the Norfolk and Norwich University Hospital NICU and the University of East Anglia, and one of the co-authors of the research said: “Preterm babies are a group at high risk of dangerous infection. More than 90% of our preterm babies are presently treated with antibiotics, yet in retrospect most did not need them. This study is important because it raises the hope that we might soon have available the technology that could help us to discern at a much earlier stage which babies really need antibiotics, and which do not need them. This could save many babies from getting antibiotics they did not need and would be an important advance in helping limit AMR.”

Crucially, the system facilitates sampling over a period of time, so that changes in the microbiota profile can be monitored. This is very useful for monitoring pathogenic bacteria, but it also lets researchers see how other interventions affect the microbiome over time. For example, it can monitor the effect of antibiotics on the overall microbial profile or measure the effects of probiotic supplementation.

Shotgun metagenomics doesn’t just profile the species diversity. In this study, the researchers were particularly interested in profiling the genes that confer antibiotic resistance in the microbiome – known as the ‘resistome’. Klebsiella in particular is of concern as it is becoming increasingly resistant to multiple antimicrobials. An expansion of shotgun metagenomics could therefore help in surveillance for AMR in these clinical settings.

The development of this platform for rapid, portable microbiota profiling brings its use in a clinical setting closer but more trials at different locations are needed to prove its utility before it can be adopted as a routine diagnostic tool. However, with the fast pace of improvements in the technology, there is clear potential for its deployment to save lives in the clinical setting, and to protect us all from the threat of AMR.

The research was supported by the Biotechnology and Biological Sciences Research Council and the Wellcome Trust. 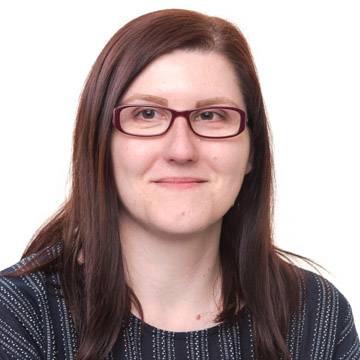