Professor James Stewart, Institute of Infection and Global Health, University of Liverpool will give a seminar entitled ‘Host factors in’flu’encing infection at the mucosal barrier’ on 2 May at 11.00 in the QIB Lecture Theatre. 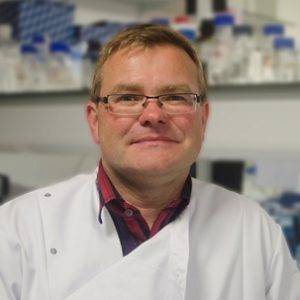 James gained a PhD in molecular virology from the Paterson Institute for Cancer Research, University of Manchester and carried out post-doctoral research on herpesviruses at St Jude Children’s Research Hospital, in Memphis, USA. A large part of his career has been spent studying pathogenesis, with a particular focus on the herpesvirus family. One of the most important aspects of his earlier work was establishing the link between active EBV infection and idiopathic pulmonary fibrosis (IPF).  He returned to the UK as a Royal Society University Research Fellow held at Edinburgh Vet School and the University of Liverpool.  During this period he worked with Tony Nash developing reverse genetics to study gamma herpesviruses.

More recently his research has focussed on virus-host interactions in the mucosal surfaces of the respiratory tract, using other respiratory pathogens such as influenza A virus and RSV. He uses conventional and molecular techniques to analyse the course of virus infection combined with big data techniques and informatics to relate the function of viral determinants with host defence responses. The ultimate aim is to translate this into novel diagnostics and interventions.

At Liverpool he has  been Head of School and is currently Chair the University Animal Welfare and Ethical Review Body, an  academic editor for PLoS ONE, and is on the Scientific Advisory Board of the Animal Health Trust and has served on UK research council funding and review panels since 2004. James has  also appeared on UK National TV giving expert opinion on Influenza vaccination.

The mucosal epithelial surface has evolved to cope with a variety of environmental challenges, including infection. Defence peptides are a critical component of homeostastis and the host response to infection at the mucosal barrier. BPIFA1/SPLUNC1 is a peptide secreted into the mammalian respiratory tract that is structurally related to antimicrobial peptides but does not have a major role in bacterial defence.

The objective of this study was to assess a potential role for BPIFA1 during Influenza A virus (IAV) infection.

We have established model systems for studying BPIFA1 function using knockout mice. We have used these mice to study the virological and immunological responses to infection as well as the role of BPIFA1 in transmission.

Our results show a significant role for BPIFA1 in defence against IAV infection. BPIFA1 KO mice were more susceptible to IAV infection and transmission of IAV. In vitro 3D models showed that BPIFA1 decreased both binding and entry of IAV into epithelial cells. Furthermore, a significant decrease of the IAV-specific antibody response was seen in KO mice as was a decrease in IAV-responding, cytokine secreting CD4 and CD8 T cells. RNAseq and high resolution label-free quantitative proteomics followed by pathway analysis reflected this, revealing a modulation of humoral immune responses in the KO mice and identifying molecular signatures associated with BPIFA1 action.

Our data define a critical role for BPIFA1 in the intrinsic mucosal host defence against Influenza A virus and that crosses over into a function in adaptive immunity.