Boosting the milk of premature babies with healthy bacteria may have helped halve the number of serious gut problems and infections, according to new research led by the Norfolk and Norwich Univeristy Hospital.

Researchers at NNUH, the Quadram Institute and University of East Anglia (UEA) reviewed the outcomes of almost 1,000 very premature babies who were admitted to the Neonatal Intensive Care Unit (NICU) over a 10 year period.

In January 2013, the Trust became one of the first hospitals in the UK to introduce daily probiotics dosing for NICU babies on the back of growing evidence that adding live Lactobacillus and Bifidobacterium probiotic bacteria to milk reduces the number of cases of necrotising enterocolitis (NEC). NEC is a life-threatening gut condition in which the tissues of the intestine become inflamed and start to die, and mainly affects very preterm babies.

The research report, published in the journal Archives of Diseases in Childhood, shows that since introducing routine probiotics on the neonatal unit at NNUH the numbers of cases of NEC among very preterm babies has dropped from 7.5 per cent to 3.1 per cent, and the number of sepsis cases fell from 22.6 per cent to 11.5 per cent.

Dr Paul Clarke, NNUH Consultant Neonatologist and Honorary Professor at UEA, said that prevention of necrotising enterocolitis is a top UK research priority and there was strong evidence to support neonatal units giving premature babies probiotics on a routine basis.

He said: “Ours is the first UK study to evaluate the potential impact of routine probiotics use on NEC and sepsis rates. It has been a big team effort to boost the gut health of these tiny vulnerable babies at the beginning of their lives and help them get the right gut bacteria from the start.

“We are proud to have completed this important research, which suggests that our use of probiotics has saved lives by preventing many cases of NEC and sepsis.

“We’re feeding more than one billion healthy live bacteria a day to each baby and it seems to have had the beneficial effect on reducing NEC that we had hoped for.

“Most NICU departments in the UK are still not routinely giving probiotics so we hope this research might encourage more hospitals to start giving early probiotics to protect babies.”

Dr Lindsay Hall from the Quadram Institute is one of the co-authors of the research. She added: “This work highlights how modulating the preterm gut microbiota with beneficial bacteria like Bifidobacterium can result in real improvements in health outcomes in these fragile and at-risk babies. The next stage is to understand how this type of supplementation modulates the wider microbial community and the mechanisms behind these beneficial effects.” 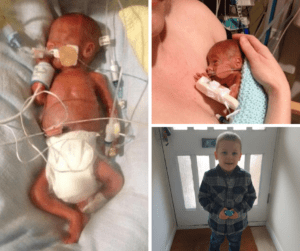 Archie Faulkner was born at NNUH in March 2016 at 24 weeks and 4 days, weighing 1lb 5oz. He was given routine probiotics during his time on NICU and is now a healthy three and a half year old.

His mum Samantha Howard, from Norwich, said: “It was a massive shock when Archie was born so early and we couldn’t cuddle him for a couple of weeks because he was so small. It took some time to get used to the fact he was born so early, but we never thought he was not going to make it. The care he received was absolutely amazing and everyone was lovely. We did everything we could to get involved in most things on the ward.”