A new precision medicine tool discovers hidden genetic connections that could improve personalised medicine for IBD, and other complex conditions

All humans carry genetic variations in their DNA, called Single Nucleotide Polymorphisms (SNPs) that can underlie susceptibility to diseases such as diabetes and cancer. For Inflammatory Bowel Disease (IBD) many disease-associated SNPs have been identified but exploiting these clinically has proven challenging, mostly due to the unknown effects of the SNPs.

A multi-disciplinary group of systems biologists, clinicians, immunologists and microbiologists have now developed and tested a systems medicine workflow that identifies the hidden genetic connections that form patient-specific patterns, which could guide better therapy selections. The work was published today in Nature Communications.

Researchers and clinicians from the Quadram Institute, the Earlham Institute, the Norfolk and Norwich University Hospital and University of East Anglia with collaborators in Cambridge, London and Leuven (Belgium) have found that patients with Inflammatory Bowel Disease (IBD) develop the condition due to distinct and different mechanisms, determined by their genetics.

Using a novel and powerful systems genomics approach identifying which of several possible pathways to disease a patient has will lead to more effective diagnosis and treatments and provide a much better understanding of this complicated condition, which can also be applied to other perplexing disease studies to help more patients.

“The workflow’s ability to identify cohorts of disease associated mutations and pathways isn’t limited to IBD; it has the potential for use in other complex disease including mental health, heart disease and autoimmune conditions,” said co-lead study author Dr Tamas Korcsmaros from the Earlham Institute and the Quadram Institute. “To develop precision therapies based on patient specific genetics opens up the possibility of much needed personalised medicine approaches to tackle these complex and poorly understood conditions.”

Inflammatory Bowel Disease affects around 500,000 people in the UK, causing a range of painful and debilitating symptoms linked to inflammation of the gut. The causes of IBD aren’t understood but are linked to dysfunction of the immune system and how it reacts to food and the gut microbiome. There is also a strong genetic link to IBD susceptibility.

To unpick how these complex factors interact in the development of IBD, gastroenterologists from the Norfolk and Norwich University Hospital and the Addenbrooke’s Hospital in Cambridge, microbiologists and immunologists from the Quadram Institute, genome biologists and network scientists from the Earlham Institute and cheminformaticians from University of Cambridge came together to link the genetic component of IBD susceptibility to its effects on patients.

Previous studies have linked the disease to specific alterations in the genetic code, finding minor changes of just one letter in the genetic code that associate with IBD. These so-called “Single Nucleotide Polymorphisms”, or SNPs can be mapped to the human genome.

If a SNP linked to IBD maps to a gene, it identifies that gene and its genetic code as being important in the disease. For some conditions this has led to improved therapies.

However, for IBD, less than 10% of the identified SNPs were in genes. Instead, over 90% of SNPs were in non-coding regions of the genome. This isn’t surprising, as most of the human genome is made up of this non-coding DNA, with genes comprising just 1%. The other 99% was originally thought to just be junk DNA, but we now know it has important roles in controlling and regulating the activity of the genes.

Additionally, some SNPs may only have very subtle effects, but in combination lead to disease progression. Given the complex nature of IBD, it was very likely this was the case for this condition. The immune system functions by taking a wide range of different inputs that trigger different signalling networks within the cell, integrating these to produce a balanced, appropriate response.

Understanding how all of the IBD associated SNPs in non-coding regions of the genome combine to influence these intricately interlinked signals in the development of IBD would fill in major gaps in our knowledge.

Addressing this became the aim of Dr Johanne Brooks-Warburton, a gastroenterologist who swapped the wards of the Norfolk and Norwich University Hospital for the laboratories of the Quadram Institute as she undertook a Wellcome Trust Clinical Training Fellowship working with the groups of Professor Simon Carding and Dr Tamás Korcsmáros. The project was funded by the Biotechnology and Biological Sciences Research Council, part of UKRI, and the Norwich Research Park Translational Fund.

“In the post-genomic era, identifying key genetic changes for individual patients has become a reality. However, to translate this information to actual clinical improvement, we needed a tool that connects the dots and provides a systems view what is happening in the disease condition” said Dr Brooks-Warburton.

Dr Dezsö Modos worked on the project with Prof. Andreas Bender at the University of Cambridge, then moved to the Quadram Institute to expand its scope.

He commented “The power of this approach is that it can find previously unidentified “hidden” connections and proteins in the signalling networks affected by SNPs in the non-coding regions, rather than just those that directly altered genes themselves. It identifies changes in the regulatory mechanisms that previous approaches would miss as they originate in the non-coding regions of the genome.” 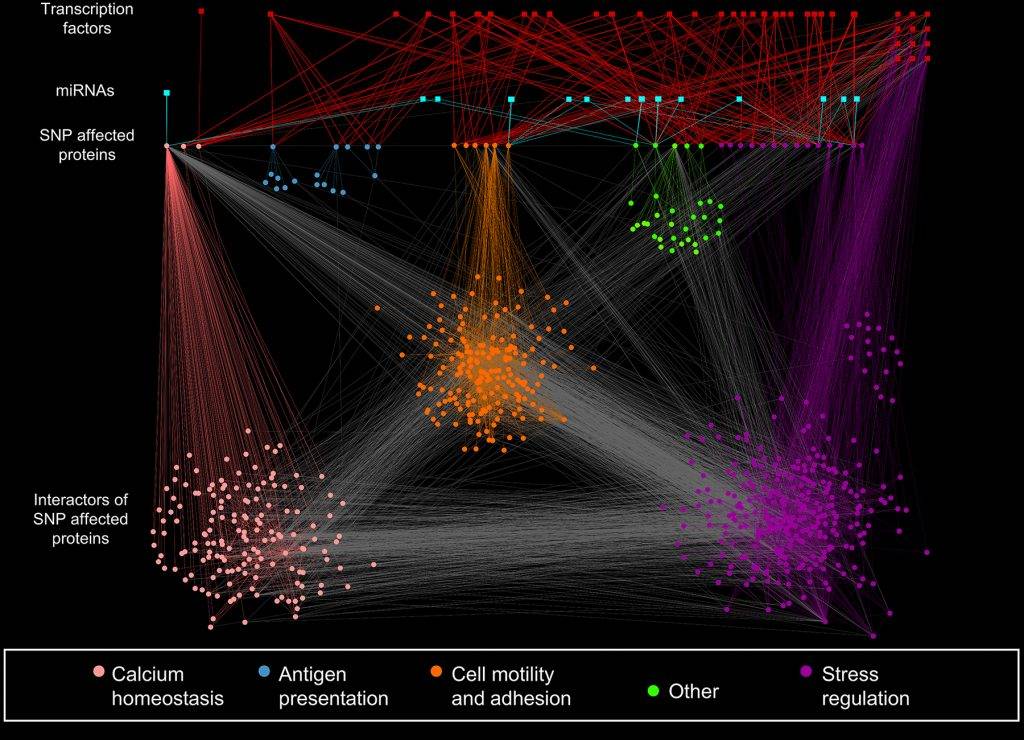 Visualisation of the signalling network associated with IBD

It also identifies changes in signalling networks brought about by the cumulative effect of many different SNPs, as it looks at the entire network, rather than focusing on one particular pathway or step. From this, key pathways leading to ulcerative colitis, a type of IBD, were picked out.

With the workflow in place, the team then worked with the UK IBD Genetic Consortium to compare 377 patients with ulcerative colitis to see how their individual genomes affected the network. They found that the patients clustered into four distinct groups, based on their “network footprint”.

This finding means that although their symptoms may be the same, the underlying drivers of ulcerative colitis may vary. More work needs to be done with larger groups of patients to validate the pathways identified here, but if successful it could lead to a more stratified, or even personalised medicine approach to treatment of IBD, based on the patients’ genomics.

The systems genomics workflow, called the integrated SNP Network Pipeline (iSNP), has now been published in the journal Nature Communications and is the subject of a patent filing.

“For complex diseases, such as cancer, IBD, and other autoimmune diseases, there are always multiple answers” said Prof. Simon Carding from the Quadram Institute and University of East Anglia.”

“Until now there were only a few tools that could carry out a complex analysis on a patient-specific way and provide various molecular maps of the same disease. With iSNP, it is now a reality to screen large cohorts, understand better the individual pathogenesis stories, and find the best treatment for the right patient.” 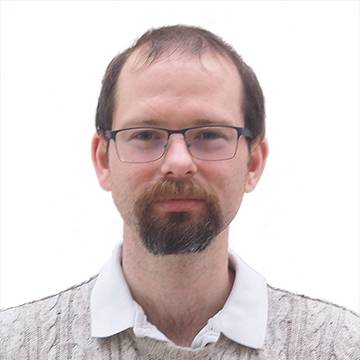 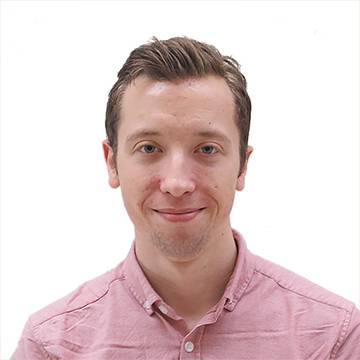