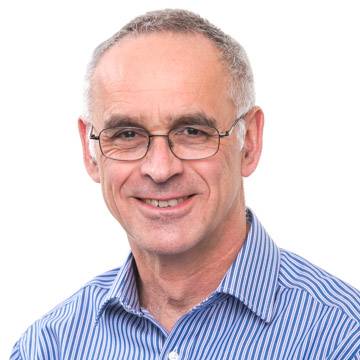 My background is in theoretical physics and science writing.

I graduated from the University of Southampton with a First in physics in 1979. I then did my PhD in theoretical physics at the University of Manchester in the high-energy physics group. My thesis title was ‘Polarization Calculations in Muon-Proton Collisions’. I graduated in 1983, then moved to Gulf Polytechnic in Bahrain, where I was Assistant Professor of Mathematics. Here I taught engineering maths to local Arab students. In 1985 I returned to the UK and became a Teaching Fellow then Lecturer in the Department of Physics at the University of East Anglia, where I taught a variety of maths, physics and computing courses.  In 1988 I took up a position as Programmer in the Department of Mathematics at the University of Melbourne.  I was involved in computational modelling with various research groups and increasingly with computer systems administration as the Department’s resources evolved from the earliest macs and pcs to unix clusters. In due course I became Senior Programmer in charge of a team of computational staff who supported both the computer systems and research effort. In Melbourne I was also involved with the Mathematics in Industry Study Group, an annual event in which mathematicians from across Australia, plus a few from overseas, gathered for a week to work on a set of real-life problems presented by industry partners.

Having returned to the UK, in 1996 I joined the Institute of Food Research, as QIB was then known, as a mathematical modeler. This was originally a half-time position, which allowed me to pursue my science writing in parallle. I started out working on a model of sedimentation in colloidal systems, before moving on to stability in emulsions. This work was linked to the shelf life of real food emulsion products and included image processing of confocal images acquired from the interior of model emulsions. Responding to evolving research interests in the Institute I developed expertise in mass spectrometry data handling and proteomics aimed at mapping out the key active regions of allergenic proteins. More recently I have worked on food authenticity, originally using low-field nuclear magnetic resonance to differentiate between food oils from different sources (olive versus sunflower oils for example) and, in the light of the ‘horsegate’ scandal, to differentiate between different meats. I married the interest in meat speciation with mass spectrometry experience gained in my allergy work to develop a mass spectrometry method for food authenticity testing. This works by seeking out key species-specific peptides that can be used both to flag up the presence of wayward ingredients and to determine their levels. We were able to demonstrate this for meats, and for cows’ milk adulteration of buffalo mozzarella cheese in high street and restaurant products.

I am currently involved in a Defra-backed project on the transition of the UK horticultural industry to non-peat growing media. The objective is to eliminate peat use on carbon emission grounds and instead migrate towards sustainable alternatives. This is a five-year project involving the main producers of growing media used in the UK, several commercial growers, and academic partners. My role is to develop a mathematical model that will allow the prediction of plant growth response in candidate growing media mixtures based on the physical measurement of the component growing media properties.

In parallel with some of the activities set out above, I was a freelance science writer from 1983 until 2006. I wrote popular science news and features mainly on physics but also mathematics and astronomy. Most of my work was for New Scientist in the UK, and Science magazine in the USA. In addition, I wrote for The Melbourne Age, Sydney Morning Herald and The Economist. I have also written two books, ‘The Quantum Quark’ (CUP, 2004) and ‘Soldier, Scientist and Stateman: a Biography of Yuvan Ne’eman’ (Ramot, 2006).

I am married with two daughters, live in North Norfolk, and enjoy travelling and squash. I have dual UK-Australian citizenship.