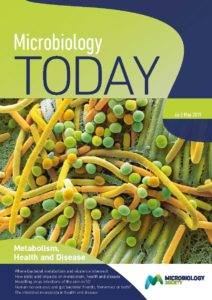 PhD student Andrew Bell and his supervisor Professor Nathalie Juge have co-authored a review article in Microbiology Today on sialic acids. Microbiology Today, the quarterly magazine of the Microbiology Society, is an important route of dissemination reaching a wide audience including parliamentarians and policy-makers.

The review covers the latest emerging knowledge on sialic acid’s role in pathogenicity, the colonisation of the gut by commensal bacteria and their role in the life cycle of viruses.

Sialic acids are a key group of molecules involved in interactions between microbes, food and our own cells. This makes sialic acids central to studies on the links between the gut microbiome and health. Their role in cross-kingdom communication and their links to human health and disease have led to descriptions of sialic acids as one of the most important chemicals in the world.

In the review, Nathalie and Andrew, along with Emmanuele Severi and Gavin Thomas from the University of York explore how despite being relatively simple sugar molecules, sialic acids have a multitude of uses. Their importance comes from their role as terminal sugars on glycans – long molecules on the surface of cells. This means they are a ‘meet and greet’ molecule through which interactions between human, bacterial and viral cells are channelled.

This review builds from recent work of the Juge Group highlighting the importance of sialic acid in the adaptation of gut symbionts to the mucus niche in the gut (Nature Comm 2017; Nature Comm 2015)