It may seem like a very unconventional treatment, but Faecal Microbiota Transplants, or FMT, have proven to be a highly effective way of helping people suffering from recurrent infections of Clostridium difficile.

FMT involves taking a sample of faecal matter from a healthy donor, screening it, and transplanting it into a recipient. This replenishes the microbiota, which is the name for the complex community of bacteria and other microbes that live in our gut. The microbiota helps keep us healthy, breaks down food and also combats infections. But sometimes, as in the case with Clostridium difficile infections, the microbiota’s composition changes, or breaks down completely.

Clostridium difficile, or C. difficile, is a bacterium that can infect the gut, causing serious disease. It’s particularly adept at infecting after someone has taken a dose of antibiotics. The usual treatment is further antibiotics, which may get rid of the infection but will also kill many of the bacteria that make up the healthy microbiota. Because of the damaged microbiota, a second infection by C. difficile is fairly common, and patients can be caught in a cycle of infections.

FMT is used to break that cycle. A healthy microbiota is transplanted into a patient prevents reinfection. Using FMT, the Norfolk and Norwich University Hospital and the Quadram Institute have achieved a success rate of over 90%. 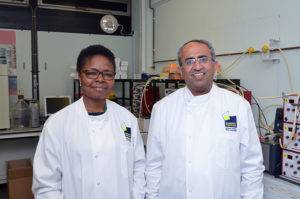 The team continue to look at ways of refining the FMT procedure. Although it has been very successful here and elsewhere in treating recurrent C. difficile infections, it’s not fully understood which components of the microbiota are essential. The team here are combining their clinical and microbiology expertise to try to address this. They have recently published a study in the journal Infectious Diseases and Therapy. In the study, they compared their FMT strategy with that of another hospital using FMT to treat C. difficile. Despite one site using fresh samples and the other using frozen, and one favouring delivery through the nose and the other via colonoscopy, both had similarly high success rates.

There is a lot of interest in using FMT to treat the increasing number of diseases that have been linked to the microbiota. A number of very small trials have taken place, but these have been hampered by the lack of standardisation in how the FMT is administered. There is also an inherent variability in faecal material, even from the same donor, so using a defined mix of microbes might turn out to be a way of achieving the same effects that also has the benefit of being more acceptable to the patient.

The Quadram Institute has a major programme of research looking at what makes a healthy microbiota, how this changes in disease and during ageing, and how the two are linked. The ultimate aim is to be able to develop new strategies based on this knowledge to treat some of these conditions. At the moment, NICE only allows FMT to be used for C. difficile infections. At the Quadram Institute we believe that by unlocking the potential of the microbiota we can make a difference to the treatment of a wide range of conditions and help people live healthier lives for longer.