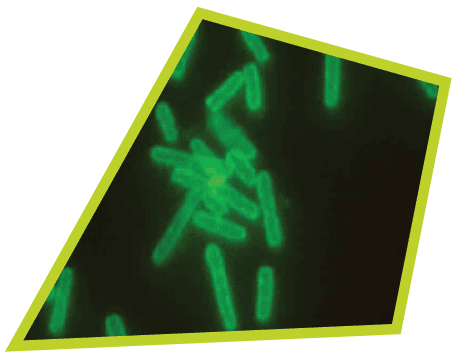 Quadram Institute microbiologists have collaborated with clinicians at the Norfolk and Norwich University Hospital (NNUH) to develop and implement a successful new treatment for recurring Clostridiodes difficile infections.

In the first year NNUH, using material prepared by QI staff, treated over 20 patients, with a success rate of over 90%. MRT is believed to be more effective than antibiotic treatment as antibiotics work against many different bacteria, not just the problematic C. difficile. In fact, antibiotic treatment is one of the most common risk factors for contracting C. difficile due to the depletion of microbiome, which among other things protects against infection. C. difficile patients treated with antibiotics often relapse, setting up a cycle of recurrent infections, leaving them increasingly sicker. MRT breaks this cycle by replacing the patient’s microbiome with a healthier one, delivering almost immediate health benefits.

The concept of competitive exclusion, where a host’s own bacteria successfully outcompete pathogenic bacteria for resources was pioneered at the Institute of Food Research (transformed into Quadram Institute Bioscience in April 2017) in the 1980s, where a defined mix of bacteria given to chicks helped inhibit Salmonella growth, making chicken products safer. This expertise in gut bacteria, now expanded into humans, was crucial in the successful implementation of MRT within the hospital. 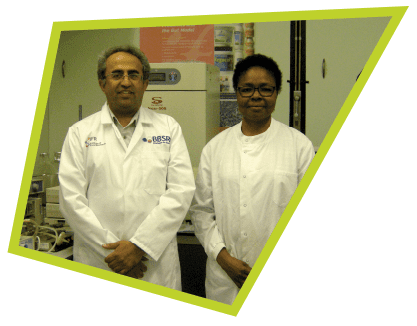 Professor Arjan Narbad, Research Leader, Quadram Institute, following NICE guidance, developed the facility to obtain, screen and deliver healthy material suitable for MRT. The entire procedure is overseen and managed by Dr Ngozi Elumogo, Consultant Microbiologist and Director of Infection Prevention and Control at NNUH. Professor Narbad has over 25 years of experience working on the microbial ecology of the gastrointestinal tract, with particular interests in developing novel strategies for preventing the colonisation of the gut by pathogens.

This expertise will help the collaboration go beyond MRT for C. difficile. Quadram Institute researchers are looking at ways of improving on the current MRT techniques.

Patients, and their microbiomes, are being monitored following the transplants to allow us to better understand how they work, and which of the hundreds of different bacterial species are the ones responsible for the benefits. And there is interest in using MRT against other conditions related to the microbiome, such as ulcerative colitis and diabetes. 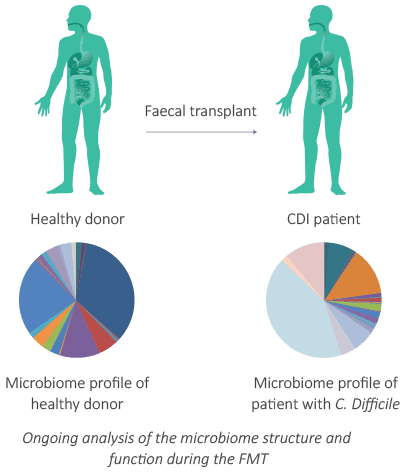 The unique co-location of experienced microbiological scientists with clinical gastroenterologists that the Quadram Institute offers will drive even more collaborations that will translate our ever- increasing knowledge of the microbiome into novel treatments for patients.

Other forms of bacteriotherapy, such as probiotics, engineered and synthetic microbes and phage therapy, have the potential for making defined changes in the microbiome directed at alleviating a number of conditions associated with the gut microbiome.

In the Quadram Institute, we also have food scientists, allowing a unique focus on interactions between food and the microbiome, which will facilitate dietary interventions or smarter foods for a stable and resilient microbiome as well as other products and therapies that deliver other health benefits.

MRT began as a pilot scheme that can now be expanded for patients across the region and in due course further afield.  This is an example of one of many novel therapies the Quadram Institute aims to deliver to bring about a step change in innovation to benefit society and the economy, reducing healthcare costs for the UK and beyond.