UEA Engagement Award for Lindsay Hall & the Guardians of the Gut 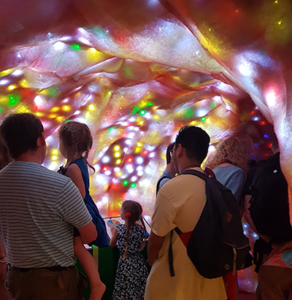 Dr Lindsay Hall’s achievements in communicating the wonders of the microbiome have been recognised by a UEA Engagement Award.

Lindsay has successfully brought together scientists from her research group with artists and creative designers to deliver engaging and innovative ways of bringing the microbiome to life.

“Guardians of the Gut” took the microscopic microbial ecosystem hidden inside our bodies and expanded it into an immersive, interactive walk-through model of what goes on in the gut. 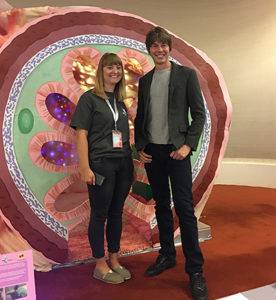 Using feedback from a pilot project in 2017, Guardians of the Gut was launched at the 2018 Royal Society Summer Science Exhibition. Professor Brian Cox was the first of thousands of people who were taken on a journey through the microbiome by Lindsay and her team over the week. The exhibit proved to be a hit, especially with young people who voted it one of their favourite exhibits. It similarly provided a talking point for young and old at the 2018 Norwich Science Festival.

Read the full story of Guardians of the Gut here: https://quadram.ac.uk/guardians-of-the-gut-creation/ 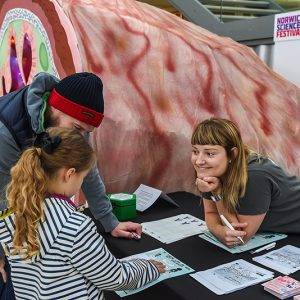 In making the award, the organisers of the UEA Engagement Awards praised the extraordinary amount of work, and this is certainly true. A comic and animated film were developed to support Guardian of the Gut, and a lesson plan for teachers to use in schools to engage pupils on the microbiome is also in development. Lindsay also regularly engages with the news and broadcast media and gives public and schools talks. She also supports and encourages her research group to get involved in engagement activities.

Lindsay collects her award at the 2019 UEA Engagement Awards Presentation and Showcase event on 12th June. The awards are presented annually to academic and support staff from across the Norwich Research Park who have performed particularly effectively with their public engagement work.